Ask Me Questions Because I Know Everything

As much as I enjoy doling out unsolicited advice to nearly everyone I see, I'd prefer scaling back to a more regular, in-depth advice arrangement.

Starting immediately, I require your questions, queries and crises in my inbox, at YoursTruly@JKesgard.com. Through this medium, I will likely be able to show off even more of my expertise in everything, while being able to profit off of my sad little fans, as well.

For a special treat, I'm going to post a couple of examples I've received randomly in the last couple weeks. This should serve as an enticing preview of what's to come on a more regular basis.

I moved into my house more than 16 months ago and my neighbors had the audacity to try to introduce themselves to me. I heard you may have some expertise in this area. Anyway, after all this time of barely acknowledging their existence, the woman next door smiled at me last week. I was outside with my family and she was carrying something out her door when our eyes met. She looked up and smiled and I have never felt so violated. I made sure to turn and face her directly, staring, unblinking, with cold distaste. Was this response appropriate? Or should I set fire to their trash cans?

Sincerely,
Ain't Nobody Got Time For That

Yes, I do have experience with this topic, so you've come to the right place. However, it sounds like you're doing a great job on your own. The trash fire is a brilliant idea, as long as you make sure to put some of your trash in it first, too. Like baby diapers, cigarette butts, anything else pungently grotesque. It's clear they haven't gotten the message so you need to up the volume. Politeness is for the weak.

Who's going to win the Timbers home opener?

Timbers 2, RSL 0. That one nasty RSL dude with the dreads is going to get all tangled up in his own hairy mess while the Timbers Beard Squad (replacing the Great Crumbled Wall of Gambia), will emerge from their caves and scare everyone else off of the ball. Whichever Timbers scoring dudes are least terrified to hang around and get the ball from the bearded warriors will earn goals for the day. I have written this so it has to happen now. However, if I'm wrong you can blame it on the fact I am the worst at this stuff.

Have you gotten any more mail for me lately? Put it on the dining room table, okay?

Thanks,
Your Vampire Baby

You terrify me but I'm glad you have confirmed your existence. I have already tried to prove your existence at other junctures, but this is the most conclusive. I wish you would move out already because the utilities are getting ridiculous. I threw out your mail but I kept a picture to remember what your name is, Waldo. Now get out. 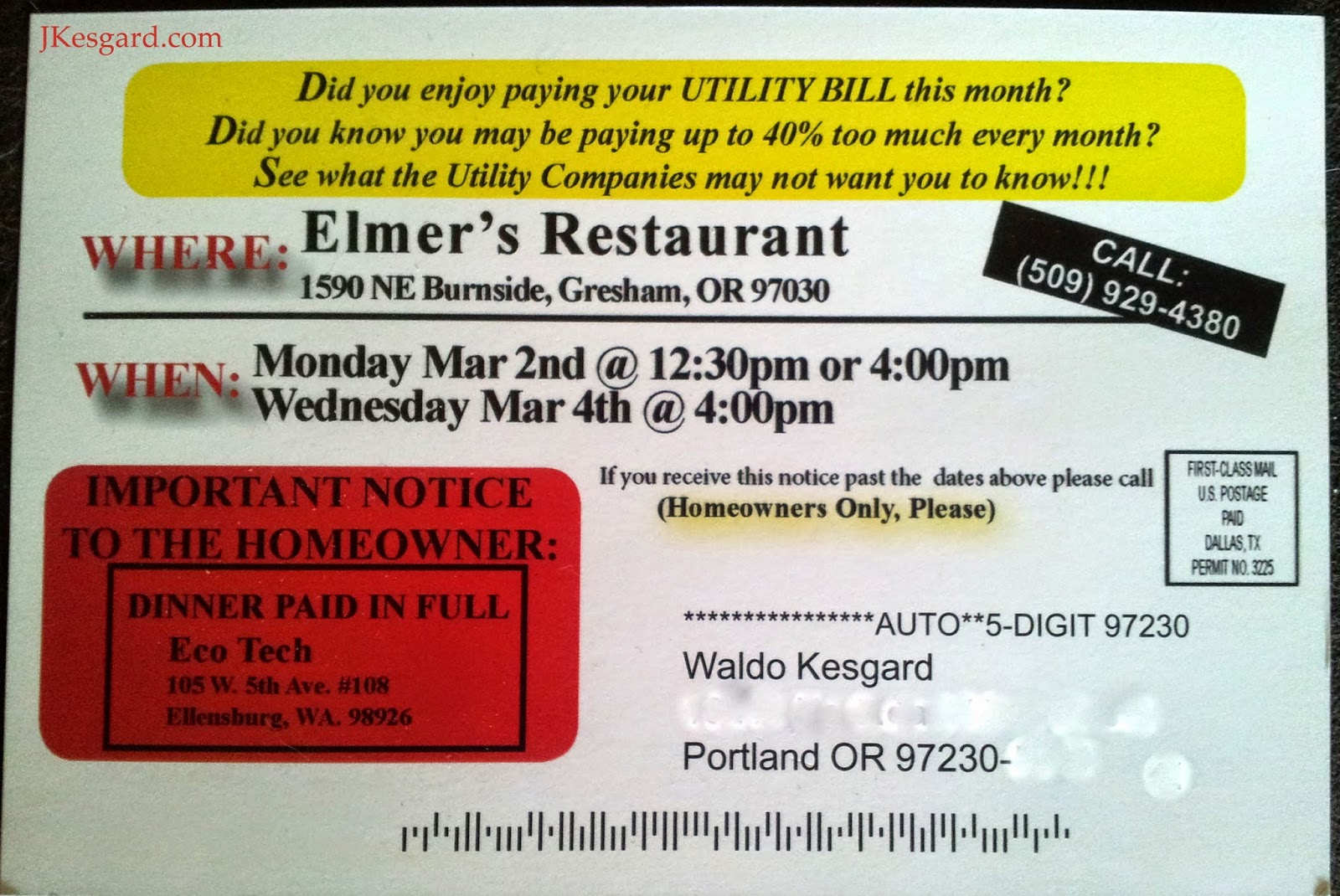 As you can tell, I'm really good at this so write to me all the time. I'm sure you'd like getting some first class advice for your peasant problems for once.

This Week in Gresham

Looking to go out-and-about in fabulous Gresham this week and just don't know where to start? Have no fear, you only need to take a look at our new comprehensive guide to discover the hottest happenings in Portland's stylish suburb paradise.

NEW PUBLIC ART INSTALLATION
Gresham residents have been treated to a stimulating new educational art installment located on the border of the Rockwood Neighborhood. For a limited time, Man's Greatest Achievement is available for viewing by critics, the public and school field trips. With a focus on anatomical science, this masterpiece delights the eyes and the intellect!

The talented vocalist relies on elevated-volume, classic blues melodies accompanied by the endless clanking of an idling diesel engine. You'll never know when and where this innovative act will appear next so keep your eyes--and ears--peeled!

Location: Construction zone on the border of Portland/Gresham

Gresham Independent Pharmaceutical Distributors are seeking participants for an upcoming drug trial of a newly-found medication.* This exciting development could revolutionize the pharmaceutical industry, and we need your help!
You too could earn a generous daily stipend of 144 aluminum cans if you qualify. Contact us today.

Location: Outside that apartment complex on Glisan that always smells like weed and has cop cars parked around the corner.

Hours: Every day after dark

During the most formative years of my youth, I often enjoyed the pastime of watching grown men smash each other with feet, fists or folding chairs. If I was especially lucky, I chanced an occasion where a folding table and being dropped onto it was more the order of the day. Often my brothers and I would reenact these feats, spreading out a large blanket to act as "the ring" on which we would practice putting each other in head locks. My favorite role was that of the heel, playing my brothers against one another with some form of wicked deception, to emerge victorious myself. Those were the grandest of times. The skills I honed as a dramatic manipulator only continued to improve and now are amongst some of my greatest assets in my career as a famous person.

I viewed the WWF-then-WWE on television all the way through my college years. It was a wonderful aid in stress release in the midst of all of my harried comings and goings. Unfortunately, as time went on, I found myself less and less amused. The wrestlers spent entirely too much time talking, plotting strategy, trying to date an opponent's girlfriend, making deals with an opposing manager, etc. The actual number and duration of wrestling matches appeared to dwindle, and with it, my enjoyment. No one was bringing out burlap sacks with snakes in them anymore. Gone were the over-the-top glam looks and rock star histrionics. I had no interest in watching a wrestling soap opera. Of course I wanted to know some of the back story that drove the feuds, but when it took up most of the broadcast, and it was boring, I choked myself out from the tedium. I soon stopped watching altogether.

More than a decade went by when during yet another night with a terrible Saturday Night Live episode poisoning my brain, I had my manager change the TV channel. What we found while surfing was life-changing: the West Coast Wrestling Connection. My older relatives mentioned in the past that they had watched Portland Wrestling, but I had missed out. Now, I watched with glee as large, muscular men in colorful spandex flipped, jumped and clotheslined all over my screen, without a huge amount of dramatic frivolity. Oh, there were plenty of personalities and jibing, but it was in good measure. Even the crowd was an essential part of the broadcast, either arguing with the bad guys or high-fiving the good. As it is filmed in Portland, I knew I needed to be there.

It took a few months to clear my appointments and sort my entourage, but then it was ON. My manager scored some complimentary tickets from a local radio station, and we attended a day of television tapings. I dressed to the nines in my typical fashion and looked slightly out of place amongst the others comprising the audience, but as I was in the first row, I needed to stand out even more so than usual. I was concerned at first that I wouldn't find anyone suitably fashionable to cheer for, but there was a gentleman in a blue striped suit, and one in a tuxedo onesie; I found them acceptable.

One young fellow walks the catwalk on the backs of his opponents, but he adores fur and fur is OUT this season. Tsk tsk. A lovely surprise is that one fashion forward gentleman was aware fanny packs are back in style and wears one unabashedly. I applaud you, sir. Well done indeed. My greatest concern is with the man with an old fashioned approach, because if he was fully dressed he would just look like another hipster and this town already has a major problem with that. However, he also likes to chug secret tonics to aid his endeavors, which I can fully endorse. I had to schedule extra visits with my life coach to sort out my feelings. My life coach indicated that perhaps my next career goal should be that of a wrestling manager and I didn't backhand her at the suggestion. I'll have my publicist look into it.

I attended another WCWC taping a few weeks later and enjoyed myself just as much. Unfortunately, they threatened my very life by offering me free pizza. I do think I have announced in every restaurant by now on this coast that I don't eat gluten so this was a shock, I tell you! My terrible manager devoured his and I fired him on the spot. I rehired him two minutes later because he had driven me there and I had no way to get home.

The venue where the filming occurs is currently under renovations so new tapings won't occur until March. Until then, I have to be satisfied watching the episodes on KPDX 13/49 on Saturday nights at midnight. I watch and live tweet each week, unless I pass out from exhaustion, and then I can still watch them a few days later on their YouTube Channel. I typically watch the last half of Ring of Honor Wrestling right afterward, as that is a fun program as well. In addition, I have recently been informed by one of my Twitter fans that another local wrestling promotion happens right down the street from me. I will have to go scope that out at some point and let all of my dear fans know what I think. Until then, dear ones, who are your favorite wrestlers from your youth? And which are your favorites today?

The celebrity next door

This picture to be updated as soon as I find a good self-tanning lotion.

J. Kesgard
Gresham/Portland, Oregon, United States
A former workaholic undergoing a radical transformation into the world's most notable layabout. Join me as I endeavor to do nothing of actual consequence.

Other projects to which I contribute: